Article on “Religious Diversity and Religious Vitality” accepted for publication!

The article “Religious Diversity and Religious Vitality: New Measuring Strategies and Empirical Evidence”  (joint work with Volkhard Krech, Markus Hero, Stefan Huber, and Kimmo Ketola) has been accepted for publication in the Interdisciplinary Journal of Research on Religion. Here´s the abstract and some results:

Quantitative studies of the conditions and consequences of religious diversity are mostly based on indices that measure the variety of religious membership in a particular region. However, this line of research has become stagnant, and the question of whether diversity affects religious vitality remains unanswered. This article attempts to shed new light on the discussion by measuring religious diversity differently and capturing religious vitality independently of membership figures. In particular, it contrasts the Herfindahl-Hirschman Index based on membership proportions with a second measure of diversity: an index of organizational diversity. Conversely, the dependent variable religious vitality is measured not by using rates of participation in religious organizations but via the Centrality of Religion Scale. Based on ecological and individual level data of forty-three local regions in Finland, Germany, and Slovenia and using multilevel analysis, our results suggest that religious diversity is related to religious vitality. However, the nature of this association differs across subgroups. 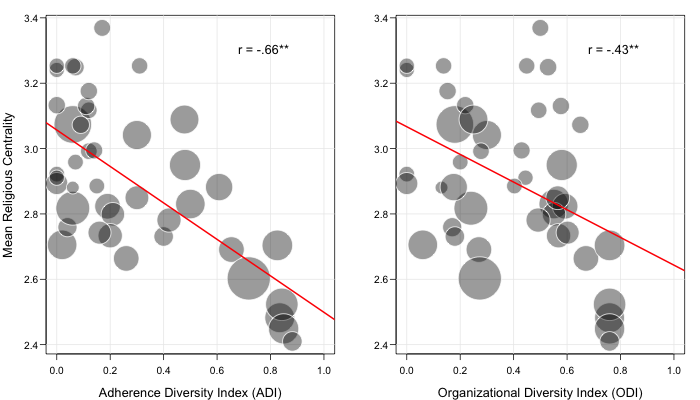 Figure 1: Bivariate correlations between religious diversity and religious vitality in  N = 43 European regions. The size of each bubble is proportional to the number of respondents in the respective region.